The group of tools for comparison of means constitute a very large portion of the common statistical tasks required in research. NCSS Statistical Software contains a variety of tools for tackling these tasks that are easy-to-use and carefully validated for accuracy. Use the links below to jump to the comparison of means topic you would like to examine.  To see how these tools can benefit you, we recommend you download and install the free trial of NCSS. Jump to:

A common problem that arises in research is the comparison of the central tendency of one group to a value, or to another group or groups. Common statistical tools for assessing these comparisons are t-tests, analysis-of-variance, and general linear models. For cases where some assumptions are not met, a nonparametric alternative may be considered. The general goal for most of these tools is to use the estimate of the mean (or other central measure), assess the variation based on sample estimates, and use this information to provide the amount of evidence of a difference in means or central tendency. In our NCSS software, we seek to provide these tools in a concise and accurate manner, with straightforward output and to-the-point graphics.

This page is designed to give a general overview of the capabilities of NCSS for the comparison of means. If you wish to see the formulas and technical details relating to a particular NCSS procedure, click on the corresponding '[Documentation PDF]' link under each heading to load the complete procedure documentation. There you will find references, formulas, discussions, and examples/tutorials describing the procedure in detail.

The T-test is a common method for comparing the mean of one group to a value or the mean of one group to another. T-tests are very useful because they usually perform well in the face of minor to moderate departures from normality of the underlying group distributions. The T-test procedures available in NCSS include the following: In addition to providing the p-value information for the appropriate test, the T-test procedures in NCSS also provide confidence intervals for means or differences, confidence intervals for the variation, z-tests, power reports, and nonparametric analogs to the tests, such as randomization tests, the quantile (sign) test, the Wilcoxon Signed-Rank Test, the Mann-Whitney test, and the Kolmogorov-Smirnov test. The procedures additionally provide tests of assumptions about variation and the distribution. 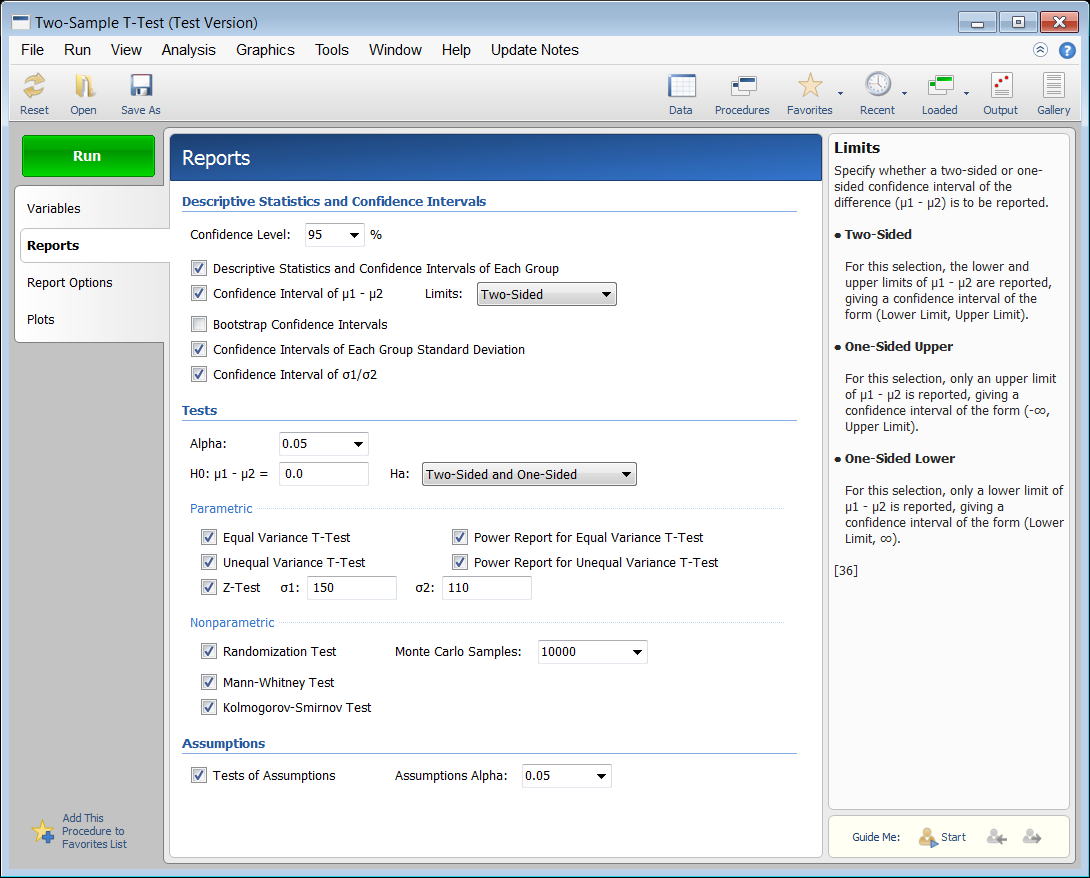 The output has a section for each report chosen. You can easily jump to a particular section by clicking on the line of the navigation pane on the left. Output can easily be saved or copied-and-pasted into a word processing document or presentation software. In addition to the numeric reports, several graphs for assessing differences or test assumptions are also available.

Some Graphs from a Two-Sample T-Test Analysis 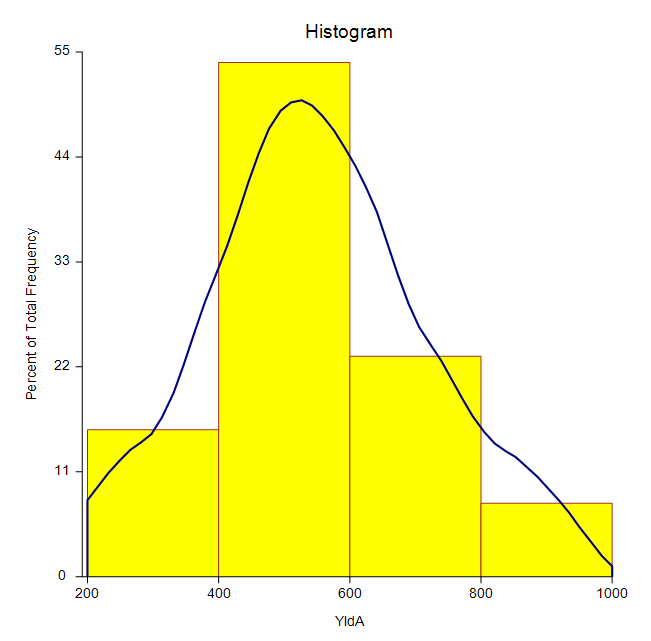 One-way analysis of variance is the typical method for comparing three or more group means. The usual goal is to determine if at least one group mean (or median) is different from the others. Often follow-up multiple comparison tests are used to determine where the differences occur. The One-Way Analysis of Variance procedure in NCSS can be used to perform a one-way (single-factor) analysis of variance and the Kruskal-Wallis nonparametric analysis based on ranks. The data for this procedure may be contained in either two or more columns or in one column indexed by a second (grouping) column. The procedure also provides an analysis of the typical assumptions associated with one-way ANOVA, as well as various multiple comparison options.

Means plots and box plots are available in this procedure. Error-bar charts may be obtained through the NCSS Error-Bar Charts procedure.

Some Plots from a One-Way Analysis of Variance Analysis This procedure performs an analysis of variance or analysis of covariance on up to ten factors using the general linear models approach. The experimental design may include up to two nested terms, making possible various repeated measures and split-plot analyses. Because the program allows you to control which interactions are included and which are omitted, it can analyze designs with confounding such as Latin squares and fractional factorials. The procedure also provides a full array of multiple comparison options.

Means plots are also given to aid the visualization of the relative means.

Some Means Plots from a General Linear Models Analysis This procedure performs an analysis of variance on repeated measures (within-subject) designs using the general linear models approach. The experimental design may include up to three between-subject terms as well as three within-subject terms. Box’s M and Mauchly’s tests of the assumptions about the within-subject covariance matrices are provided. Geisser-Greenhouse, Box, and Huynh-Feldt corrected probability levels on the within-subject F tests are given along with the associated test power. Repeated measures designs are popular because they allow a subject to serve as their own control. This improves the precision of the experiment by reducing the size of the error variance on many of the F-tests, but additional assumptions concerning the structure of the error variance must be made. This procedure uses the general linear model (GLM) framework to perform its calculations. Identical results can be achieved by using the GLM ANOVA procedure in NCSS. The procedure also provides a full array of multiple comparison options.

This procedure performs an analysis of variance on up to ten factors. The experimental design must be of the factorial type (no nested or repeated-measures factors) with no missing cells. If the data are balanced (equal-cell frequency), this procedure yields exact F-tests. If the data are not balanced, approximate F-tests are generated using the method of unweighted means (UWM). The F-ratio is used to determine statistical significance. The tests are nondirectional in that the null hypothesis specifies that all means for a specified main effect or interaction are equal and the alternative hypothesis simply states that at least one is different. Studies have shown that the properties of UWM F-tests are very good if the amount of unbalance in the cell frequencies is small. When there are several factors each with many levels, the GLM solution may not be obtainable. In these cases, UWM provides a very useful approximation. When the design is balanced, both procedures yield the same results, but the UWM method is much faster. The procedure also calculates Friedman’s two-way analysis of variance by ranks. This test is the nonparametric analog of the F-test in a randomized block design. The multiple comparison options available in this procedure are the same as those given in the General Linear Models procedure.

Several analysis programs are available in NCSS for the analysis of designed experiments. The General Linear Models and the Multiple Regression procedures are often used. The Analysis of Two-Level Designs procedure is used to analyze a very particular set of designs: two-level factorials (with an optional blocking variable) in which the number of rows is a power of two (4, 8, 16, 32, 64, 128, etc.) and there are no missing values. Given that your data meet these restrictions, this program gives you a complete analysis including:

Multivariate analysis of variance (MANOVA) is an extension of common analysis of variance (ANOVA). In ANOVA, differences among various group means on a single-response variable are studied. In MANOVA, the number of response variables is increased to two or more. The hypothesis concerns a comparison of vectors of group means. When only two groups are being compared, the results are identical to Hotelling’s T² procedure. The multivariate extension of the F-test is not completely direct. Instead, several test statistics are available, including Wilks’ Lambda, the Lawley-Hotelling Trace, Pillai's Trace, and Roy's Largest Root. The distributions of these statistics are approximated by the F-distribution. In a MANOVA model, there are one or more factors (each with two or more levels) and two or more dependent variables. The calculations are based on extensions of the general linear model approach used for analysis of variance.

The Mixed Models procedures in NCSS provide a flexible framework for the analysis of linear models. There are four models procedures in NCSS: The Mixed Models - General procedure provides the most flexibility, but is the most complex of the mixed model procedures. The other three mixed model procedures use the same mixed model engine in NCSS, but are setup for the analysis of a given scenario, which simplifies the specification. Some examples of design scenarios that can be analyzed in the Mixed Models procedures are Mixed models have several advantages over traditional linear models. Just a few are listed here: Mixed models are often particularly useful in medical studies where a wide variety of factors influence the response to a treatment of interest. For example, suppose that an experimental treatment is being administered to a group of patients desiring to lose weight. Traditional statistical methodologies (e.g., ANOVA, multiple regression, etc.) require that the treatments be given at the same time intervals for all patients in the group in order for the statistical analysis and conclusions to be accurate. What would happen if patients were not all able to receive the treatment at the same time intervals or if some patients missed some treatments? Traditional statistical approaches would no longer be valid since there are random events or components entering into the experiment. This is where mixed models techniques become useful. A mixed model would allow us to make inferences about the treatment by modeling and estimating the random components. Furthermore, mixed models allow us to make greater use of incomplete data, such as that obtained from patients who drop out or miss scheduled treatments. Traditional methods would exclude such individuals from the analysis, losing valuable information. In the NCSS Mixed Models procedures, covariates may be specified in addition to categorical factors and a repeated (time) term. The available covariance patterns include diagonal, compound symmetry, AR(1), unstructured, banded, and Toeplitz, among others. The maximization solution may be determined using the Newton-Raphson, Fisher Scoring, MIVQUE, or Differential Evolution methods. Output options are available for hypothesis tests, multiple comparisons, L matrices, parameter estimates, least squares (adjusted) means, asymptotic variance-covariance matrices, as well as means, interactions, and subject plots.

Some Means and Subject Plots in a Mixed Models Analysis "We have used your product for almost 20 years... It has been a vital part of the research initiatives we have conducted over the years. Through each version of NCSS, we have been able to count on its user-friendly design, broad range of statistical tools and a high level of very personalized customer support..."